I was at Electromagnetic Field two weeks ago, which had a cyberpunk-themed area. Some months ago I'd bought a Sinclar FTV1 (or TV-80) which is a flat(ish) screen TV using a cathode ray tube, so I decided to turn it into an arm-mounted portable computer. The result comes out looking a little like the British equivalent of RobCo's attempt at a Pip-Boy 3000: 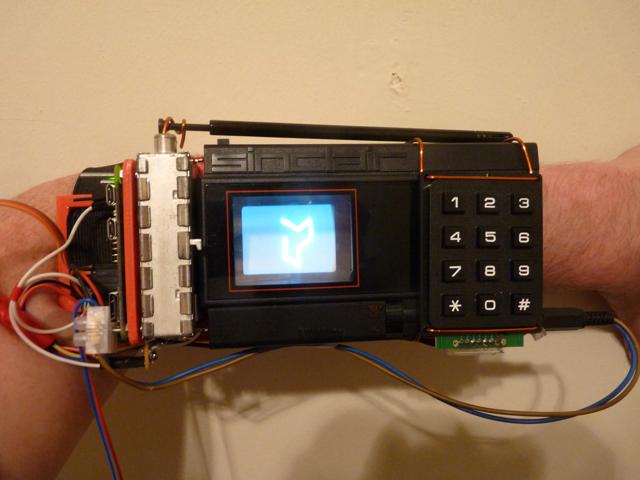 Wearable computer in use

The computer part comes from a Raspberry Pi Zero W, which can connect to Electromagnetic Field's field-wide wifi and display information pulled from feeds around the camp. All Raspberry Pis have composite video output, although it's not always obvious. On the Zero series it's on a couple of pads which you need to solder wires or header pins to.

The Sinclair FTV1 is a much older device, and has no video inputs at all other than its aerial. This means it's unable to receive any TV at all in the UK, since we switched off analogue broadcasts many years ago, and the FTV1 definitely does not decode digital TV. However, we can turn a composite signal into UHF video, suitable for connection to the TV's aerial. In the pictures, you can see a twist of copper wire loosely connecting the UHF modulator (the silver box) to the aerial. Connections don't have to be particularly good for this to work. 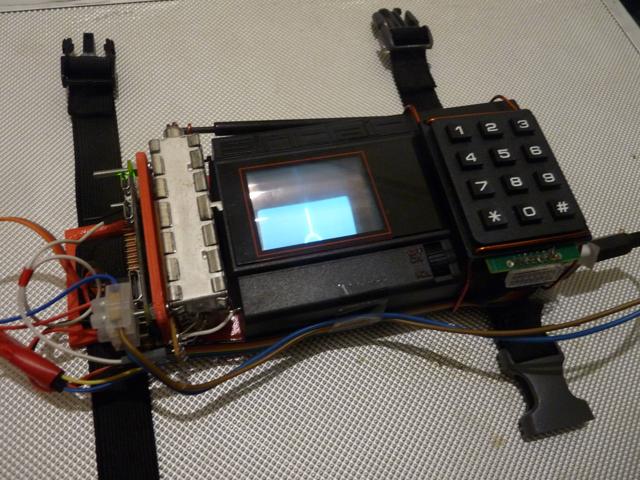 The UHF modulator is made by Astec who also made the modulators on many 8-bit home computers, to allow them to connect to TVs. I got this one off eBay, and it appears to be new old stock - it came in a bag with the original datasheet, and there seem to be plenty available. The one I've used is a special version which can also modulate audio, although the Zero doesn't have analogue audio out so this hasn't been used yet.

It's quite likely that you could bypass the UHF stage altogether, by finding the composite signal inside the TV-80. The TV-80 probably has a circuit inside which does the opposite of the modulator to turn UHF back into a composite video signal. However, I wanted to avoid modifying an otherwise untouched TV-80, and also the noise-prone UHF signal gives some wonderful glitches:

The brief out-of-focus parts are my phone trying to refocus, everything else is the TV signal with its interference.

The computer doesn't do much at the moment - when connected to Electromagnetic Field's network it could show the list of beers on at the bar, and show the weather forecast. The software is written in PyGame, writing directly to the framebuffer, and was meant to resemble teletext - a series of pages from 000-999 with some dynamic content.

There wasn't room for a battery, so this needs to run off a USB power bank. I had the power lead for the computer running into my shirt sleeve and down to a power bank in my pocket. The FTV1 is surprisingly efficient for a CRT - it draws less than 100mA at 5V. Since it was originally meant to run off custom disposable batteries, they probably put a lot of work into power draw. The Raspberry Pi uses a bit more power, but a candy bar sized power bank will happily run it for many hours.

Update: I was asked for a schematic diagram, so I've put together another terrible SVG diagram which is how it works, as best I remember. Click to enlarge: 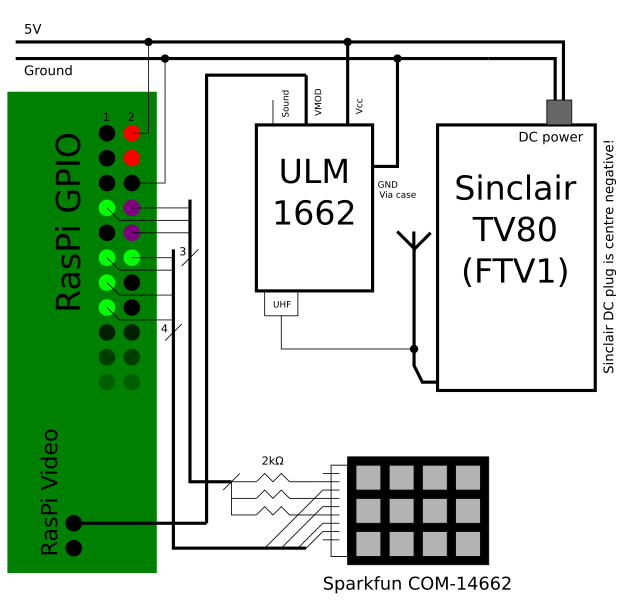 As with most of my projects I can't provide actual build instructions; this is just a record of what I've built, as best I remember it - if you want to try and reproduce it you will need to research the parts and verify the design yourself. Also bear in mind: