September progress on the Turing machine 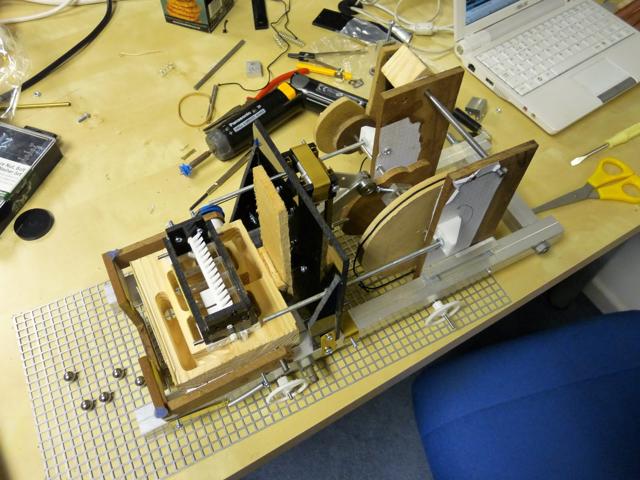 As of this evening, all the cams are working correctly and the main sequencing events (lift data, reset direction, drive) are working. The drive system is driving too far backwards, three grid spaces instead of two. The data lifter also requires far too much force to drive. Ideally, this could be counterbalanced by adding some lead weights, but there isn't a great deal of space to add anything right now.

The cams have been a lot more problematic than expected. Attaching a cam to a 5mm steel shaft requires some sort of flange which itself has to be secured to the shaft. I made several flanges out of aluminium which were meant to be fixed to the shaft by set screw, but in a lot of cases the thread failed before I could tighten the set screws enough to hold the cam. Filing flats on the shaft helps to some extent, but means the angle of the cam has to be decided then and there. When this machine is completed I think there might be quite a lot of subtle adjustment needed in the timing, so I'm reluctant to go filing or drilling the drive shaft right now.

Forward/reverse movement has been a cause for some concern. The 'punt' mechanism is working, but I'm not convinced it will be reliable in the long term. I also have plans for a more conventional forward/reverse gearbox and have a sprocket which will interface with the steel grid, thanks to Razorlabs.

We'll see how it goes.