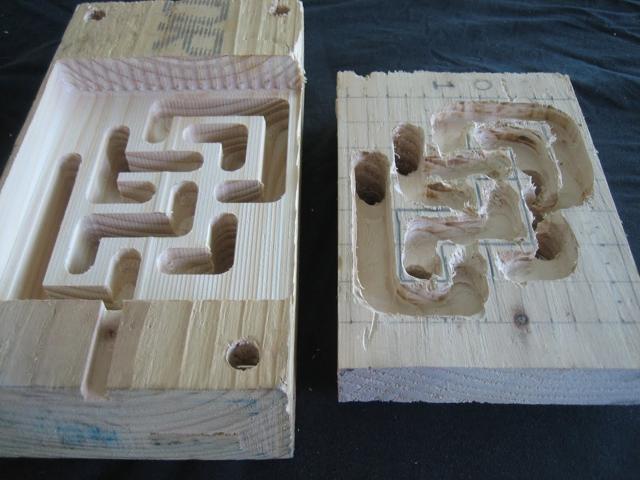 This is a picture of two attempts at making a machine component. I'll explain what it actually does later, but this is mainly a post about how I made them.

On the right is my first attempt, cut by hand with a Dremel with a router accessory. As you can see, it's pretty rough, but it just about works - you can drop a ball bearing into one of the slots and it will roll down to one of the exit holes in the base. Sometimes they'll stick, so it needs a bit more work yet.

On the left is a CNC milled block which I was able to get made due to the opening of Fab Lab Manchester. I mentioned this a while ago when they made their press release, and they've just opened so I went along on Saturday. It's an amazing place and free to use on Fridays and Saturdays so long as you don't mind sharing the details of your project. This was cut using their enormous ShopBot CNC vertical mill.

I'd never got on well with 3D modelling programs and tended to use POVRay to model projects since I'm used to working with code rather than WYSIWYG editors. At Maker Faire UK this year I discovered OpenSCAD which is in some ways similar to POVRay - it takes a text scene description file and produces a 3D representation which can then be exported as an STL file - a format which milling machines and 3D printing machines can understand. The maze shown was just a piece of text in an editor on Thursday night, and by Saturday afternoon I'd been able to turn it into a physical object. For an amateur mechanical engineer like me, this really changes the game and allows a huge number of ideas that I'd never otherwise be able to realise. I'm very grateful to Fab Lab and especially Hayden who spent most of his afternoon showing me how to set up the mill. 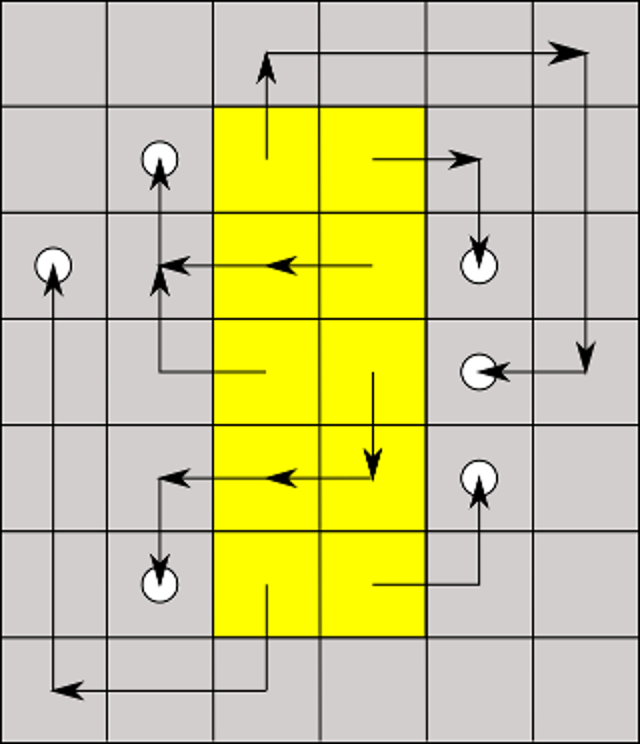 If you're still interested in what it does, the diagram to the left might make it clearer. The idea is to drop a ball bearing into one of the central slots, marked by the yellow squares. The two columns represent two states of a state machine, and the five rows are the five different input symbols. Based on the state and input symbol, the ball bearing rolls down to one of five output holes. The vertical position of the output hole is the output symbol. In short, this is part of the control logic for a 5-symbol, 2-state universal Turing machine - the Wikipedia article may help explain this if you're not familiar with them.