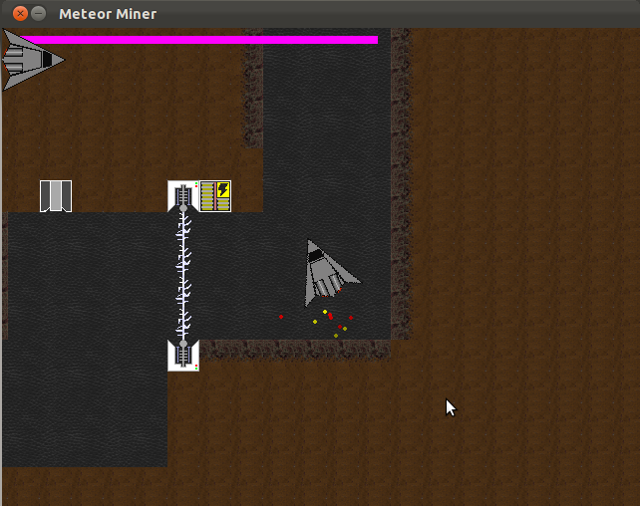 Here's another couple of PyGame demos. Meteor Miner is a fairly straight clone of an old BBC Micro game, Thrust. Thrust was probably cloned from another platform, but it's not a style of game that has been used much recently. You control a spaceship by turning left or right and accelerating forwards, much like Asteroids, but the goal is to fly inside the structure of a meteor and recover ore. You can also shoot forwards to destroy the guns which will attack you inside the meteor.

Fuel is limited and ore makes you heavier. You can escape the meteor with just one tonne of ore, but the goal is to recover all of it.

This is the first game I've done with sound, although on all the platforms I've tried (Ubuntu, Windows 7 and Android) the sound suffers from an annoying latency. The game works well with the PyGame subset for Android but as PyGame doesn't handle multi-touch devices yet, I can't emulate the buttons on a touchscreen, so it will only be playable with a keyboard. 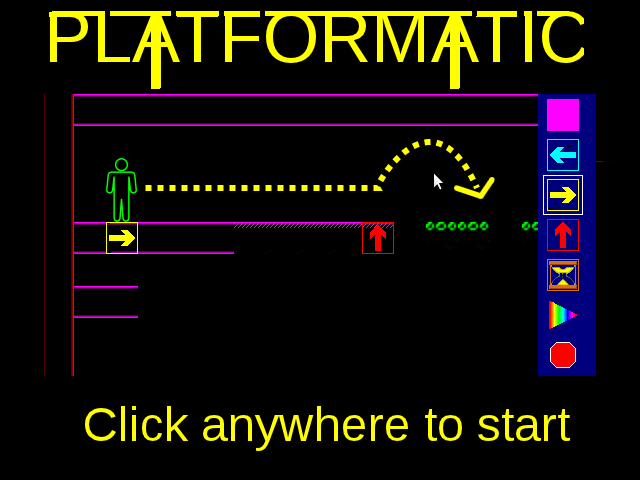 Platformatic is a puzzle game which looks like a platformer; rather than asking the player to time jumps exactly, it asks him or her to place instruction symbols onto the screen, which the character will follow when it treads on them. This partly came out of my frustration with platform games which require you to make a long sequence of carefully timed actions, often repeating the first ones hundreds of times until you finally get the last one correct.

I'm not particularly pleased with either of these games, but I've forced myself to bring them to a point at which I can publish them, as I otherwise tend to abandon old projects while half-finished and start on new ones.

Both games are available from my 2dgames repository on github and are MIT licenced: https://github.com/jmacarthur/2dgames . As before you'll need PyGame to play them; as I get better at creating games, I'll consider packaging some of them up or porting them so they can be played more easily.